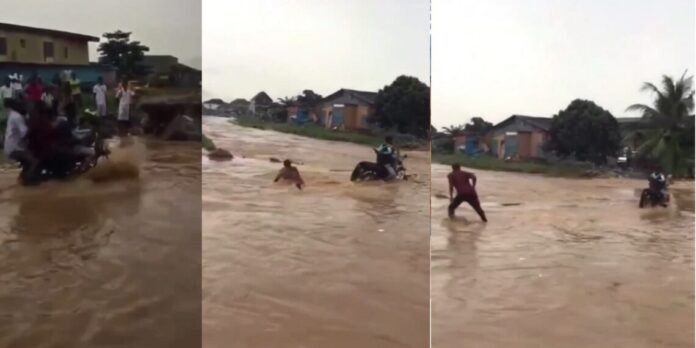 An unfortunate incident was caught on camera in Oko Oba, Agege, Lagos as a commerical bike rider was swept away by flood after he refused to let go of his bike and save himself.

The video shows the man riding a bike with two passengers behind him as he tries to drive through the flooded street.

However, the bike rider continued driving through the flooded street before the flood current was too strong for man and machine and it started sweeping them away.

As the water carried the man away, he refused to let go of his bike to save himself.

Spectators are heard screaming for the man to leave the bike.

Watch the video below.

SEE THIS!  Emefiele: No Going Back On Withdrawal Limits

Portable leaks her private chats with her second wife he Caught...