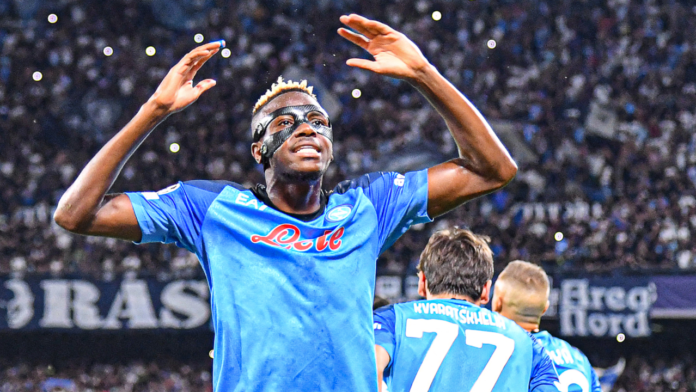 Victor Osimhen’s Napoli has been on an impressive run and form in the 2022/2023 season, and this reflected in the UEFA Champions League as the Italian side set a new record in the competition.

Napoli became the side to score the most goals in the group stages of the Champions League with a total of 20 goals.

The Italian side had been totally ruthless as they had not lost a game since the start of the 2022/2023 club football season across all competitions in over 17 games, a record which came to an end following the defeat to Liverpool at Anfield. Simeone and Raspadori both scored 4 goals each, with Zielinski scoring 3 goals for the club, Kvaratskhelia recording 2 goals and Ndombélé, Politano, Zambo Anguissa, Osimhen, Di Lorenzo, Lozano and Ostigard all scored 1 goal each.

Napoli finished top of their group and secured a qualification into the competition’s knockout stages.

SEE THIS!  Samuel Eto’o Finally Reacts To The Incident With The Algerian Supporter

Wizkid Sold Out Pre-Sale Tickets for His Tottenham Stadium Show, He...