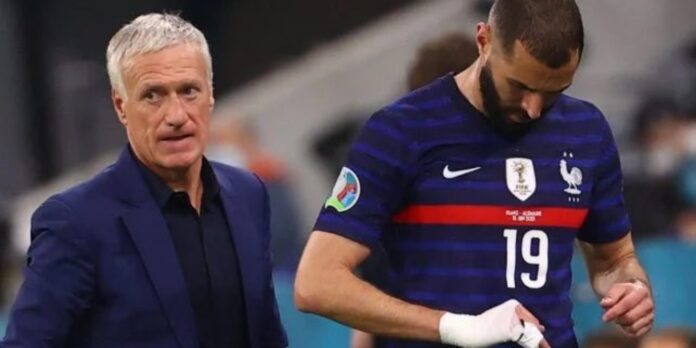 Deschamps who led France to win the 2018 FIFA World Cup which was hosted in Russia was speaking at a pre-match press conference. He lashed out at a reporter who kept asking him questions surrounding the possible return of Benzema to the French squad after the striker recovered from injury.

The journalist asked him if Benzema was going to be in Qatar as a spectator or as a player when the final kicks off against Lionel Messi led the team.

Are you spreading the word among foreign journalists? If I don’t answer, you’ll say I’m p***ed off. I have players who have been injured before. Karim is one of them. The last to be injured is is Lucas Hernandez. Since then, I have 24 players to manage and you know them. To ask the question vis-a-vis these players, if I may say so, is at least clumsy, if not a little more. The group is there. I don’t take care of the invitations of players, former players or injured players. I don’t know who will be there. Some players have been injured and Karim Benzema is one of them and Lucas Hernandez got injured in the first game. From that point on, I have 24 players in my squad and they are the ones at my disposal, so I don’t think it is fair to those players to ask about players who aren’t here. It is not up to me to decide who comes to watch the game, former players or injured players, I focus on my squad and the players at my disposal.

Benzema has earlier released a statement on his official Instagram account with the caption ” I don’t Care”. There are reports that the Real Madrid player is referring to the rumors saying he will be part of the French team to pick up medal.

Seyi Shay shares 10 life hacks ahead of her 36th birthday