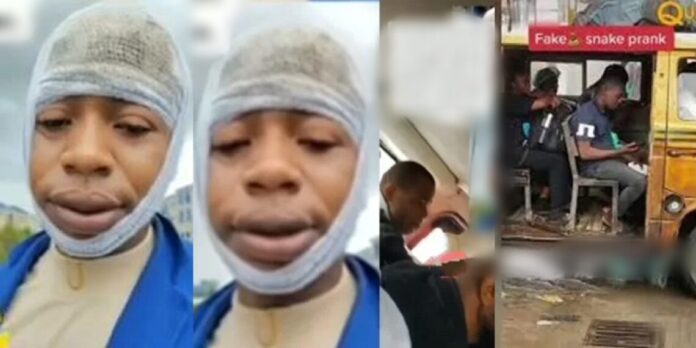 A Nigerian content creator received the beating of his life after he played a fake snake prank on passengers on a commercial bus.

The popular skit maker’s content often revolves around pranking commuters by pretending to have a box or bag containing a snake inside the bus and scaring passengers into getting off. However, this time he wasn’t so lucky as passengers on a bus he tried to prank descended on him after realizing he did not have a snake as he had claimed.

The irate youths beat him to the point that he landed in the hospital and had his head wrapped in a bandage afterwards.

He shared a video showing him leaving the hospital where he had gone for treatment and narrated what happened to him.

In other news, no fewer than seven people were fatally shot and killed after gunmen attacked the convoy of popular clergyman, Apostle Johnson Suleman.

The General Overseer of Omega Fire Ministries (OFM) International was on Warake road in Auchi, Edo state, on Friday evening, October 21, when gunmen laid siege on his convoy and opened fire at them.

It was gathered that four policemen, one driver and a lady were killed in the gruesome attack.

Graphic pictures and videos making rounds online shows the deceased persons lying on the road in a pool of their blood.

SEE THIS!  “My responsibility is to love her” – Lady flaunts her ‘pregnant teenage daughter’

“If you don’t deliver twins in 1 year, I’ll stop practicing...