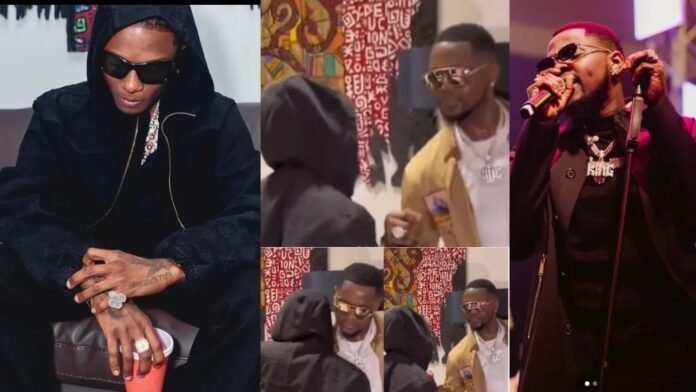 Unlike the way Wizkid and Asake linked with each other for the first time after his show “Flytime Fest 2022 Starboy Live” at the Eko Convention centre, it was otherwise between Wizkid and Kizz Daniel as it was absolutely nothing but fake love.

Recall that Kizz Daniel had a song titled “For You” featuring Wizkid released in 2018, however the video of the song was released but the duo were nowhere to be found in it

As at the moment of filling this report, Kizz Daniel and Wizkid are not following each other on social media platforms and the “Pour me water” hitmaker is well known to be Davido close friend.

In the clip that hit the internet, Wizkid and Kizz Daniel were spotted together at the backstage. Wizkid, the “Essence” crooner moves towards Kizz Daniel then exchanged greetings with him before he went to sit down.

Meanwhile a close observation from fans showed that Kizz Daniel was reluctant in exchanging greeting with Wizkid as his facial expression when it comes to smiling was hard and the hug was obviously forceful and the singer was quick in dishing out Wizkid from him.

SEE THIS!  Bella Shmurda: “I Wished Olamide Signed Me”

Watch the video below;