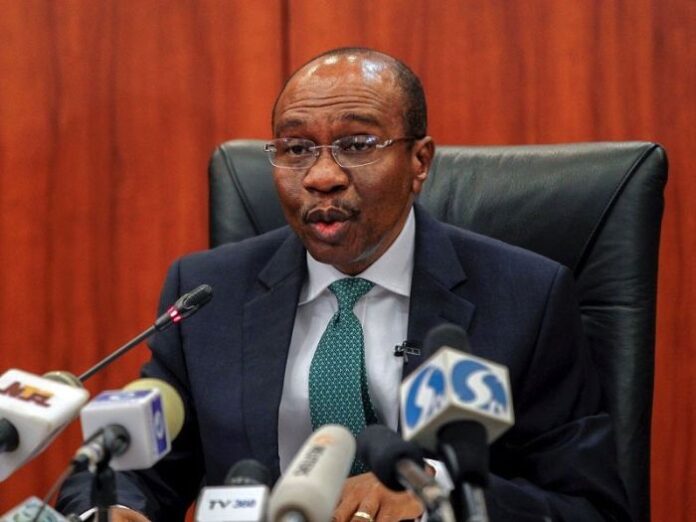 Godwin Emefiele, has said that about One-third of the world economy is currently in recession due to the damaging effects of Covid pandemic and the ongoing war between Russia and Ukraine.

Emefiele disclosed this on Monday while speaking at the Foreign Affairs and Aviation stakeholders’ meeting with the House of Representatives Speaker, Femi Gbajabiamila.

He noted that the bank is working outside the box to mop up foreign exchange and strengthen the Naira and by extension the economy through what he called the RT 200 policy.

“What is happening is a global challenge. Indeed as I speak I can say that the global outlook today is darkening due to deepening global slowdown.

“Today more than one third of the global economy is in recession. The global community is facing rising incidents of unemployment. Indeed most of the countries of the world are facing rising inflation. As a result of this year alone, the USA happens to raise rates almost by 3.75 percent in 2022, that has created some serious inflation pressures and depreciation on the currencies of other countries.

“From the CBN since February this year, we introduced the RT 200 programme which is that programme introduced in order to encourage repatriation of Forex proceeds from exporters of non oil export products. We are gratified that the programme is doing well.

“When we started it, the first six weeks in February and March, we were only able to see repatriation, we paid rebates on repatriation of about $62 million.

“The second quarter, we saw an astronomical improvement to $622 million in exports proceeds of non oil. For the third quarter, we have seen almost close to a billion dollars,”

SEE THIS!  How to identify Original redesigned Naira notes

The CBN boss, while responding to the issue of $700 million trapped funds of foreign airlines, said that contrary to IATA’s representative’s position that nothing has been done to reduce the backlog, said $265 million has been earmarked for disbursement to the foreign airlines through their various banks.

He also called on other foreign countries to grant landing permits to Nigerian Airlines to fly their routes so as to reduce the burden of accumulated funds going forward.

Gbajabiamila told the gathering that the issue of blocked or trapped funds of foreign airlines was giving the House a great cause for concern.

Gbajabiamila added that the principle of reciprocity requires that Nigerian carriers are also allowed to fly Into countries whose airlines have a huge market in Nigeria appealed to the CBN governor to seek ways of raising Forex for the airlines, just as he agreed that allowing Nigerian Airlines operate many of the international routes will reduce the incident of trapped funds in the future.

Aisha Yesufu: “We should learn to be comfortable with divorce”