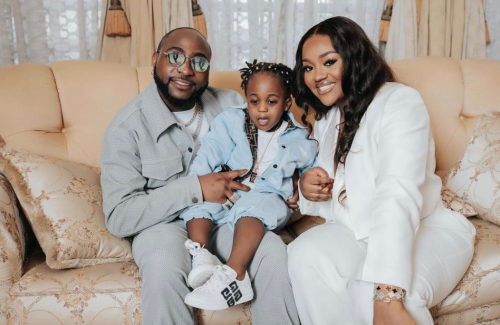 David Adeleke, aka Davido, and his lover, Chioma Rowland, over the death of their son, Ifeanyi.

“I don’t even know how to react to this rude shock. I was hoping it wasn’t true. My God!!!

Actor Williams Uchemba called for prayers for Davido and Chioma.

“Please say a prayer for David, Chioma, and the entire family. Nobody deserves this kind of pain. Rest up, little one.”

“Praying for healing, comfort & strength for David & Chioma. So heartbreaking.”

Comedian Ayo Makun, aka AY, said the death was tragic.

“the death of a child is unnatural, unfair, and tragic. This hits me so bad.”

“It is one of the saddest things when kids are being buried by parents. We really wish it never happened!

May The Almighty give the parents and the entire Adeleke family the strength to bear this loss? Rest In Peace Champ.”

Reacting, Keyamo condoled with the family.

“I was actually waiting for a family statement on this to be sure. My condolences to this young family for experiencing this grief at this time.

“May God Almighty grant the Adeleke family the fortitude to bear this irreplaceable loss; and to all those who have suffered similar fate.”

Meanwhile, Atiku has taken to his verified Facebook page to express his condolences.

“My thoughts and prayers are with Davido and Chioma and the Adeleke family at this time. I pray for God to strengthen and comfort them”.

“My thoughts and prayers are with @Davido, who has lost a son, Ifeanyi. No parent should experience losing a child in such an unfortunate incident.

“May God comfort him and Chioma, the mother of the child.”

Meet 10 Nigerian Celebrities Who Are Lawyers In Real Life