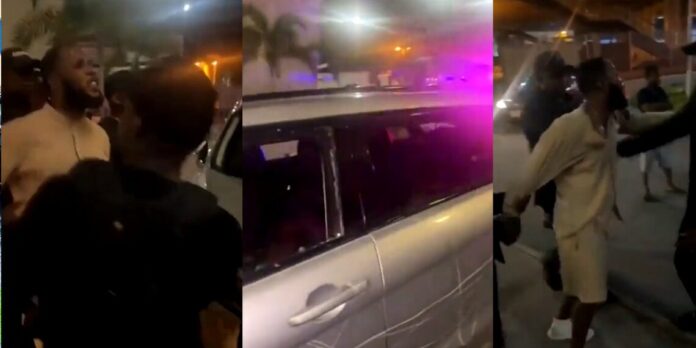 A trending video on micro-blogging website, Twitter, shows the moment a Nigerian man angrily destroyed an expensive car he had acquired for a woman said to be his side-chick.

According to reports, the man who is happily married but still goes around maintaining the lifestyle of his side-chick, felt highly betrayed when he discovered that his side-chick has been cheating on him. His next line of action would then be to wreak havoc on the Range Rover he recently bought for her.

Watch the video below ;

Social media users were however shocked that the man could get angry at being cheated on when he was actively cheating on his wife.

See some reactions below ;

The audacity to demand for loyalty sef makes me madder 😩😩. Like u can't handle what u dish out? I pity the woman he calls his wife sha

You’re cheating on your legally married wife but you don’t want your side chick to see another man. “Side chick”. Some people are mad but they’re not aware.

SEE THIS!  Buhari: No Going Back On Naira Redesign

Nkechi Blessing heavily roasts Nina Ivy for calling her out |...

“Thank you for loving me against all odds” – Olakunle Churchill...

Don Jazzy: Why I Sign Producers And Songwriters To Mavin Records