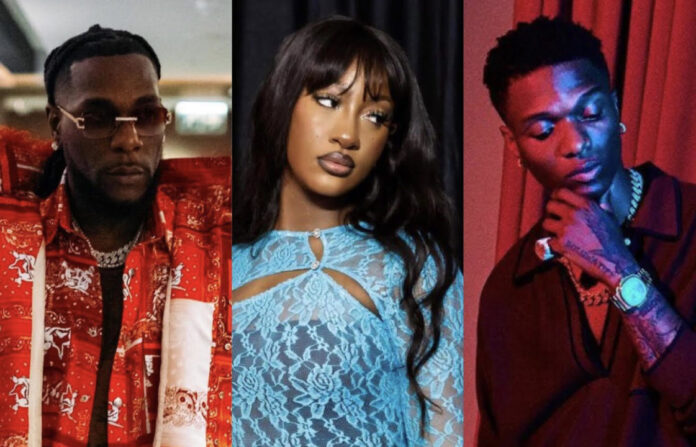 Nigerian singers Burna Boy, Tems, and Wizkid are currently the topic of discussion after the recording academy announced the nominees for the 2023 Grammys.

The Grammy Award, which is an award presented by the Recording Academy to recognize “outstanding achievement in the music industry” of the United States and beyond, is scheduled to take place on February 5, 2023, and on November 15, 2023, it rolled out its nomination list.

Afro-fusion act Burna Boy clinched nods for his ‘Love Damini‘ under the category of “Best Global Music Album” as well as “Last Last” for “Best Global Performance.” Talented Nigerian songstress Tems received three major nominations in the categories of “Best Rap Song” and “Best Melodic Rap Performance” for her contribution to the hit collaboration with Future and Drake titled “Wait For U.” Tems also received another nomination for “Album Of The Year” as a featured artist on Beyonce’s “Renaissance” album.

Wizkid, who lost in the “Best Global Music Performance” and “Best World Music Album” categories at the 64th Grammy Awards, missed out on the 65th edition of the award as he didn’t release any music in the calendar year required by the Grammys for its 2023 edition.

As expected, fans has taken to social media to express their thoughts the the Nigerian nominations and exclusion.

Tems bagging grammy nominations after Essence, ayo gbalogun on the other hand…. pic.twitter.com/ITEEfQEaJj

NO GRAMMY NOMINATION FOR BEST NEW ARTIST ????? THIS IS BUSH #GRAMMYs pic.twitter.com/kJTl3Pmrlz

Burnaboy has learnt and mastered this Grammy cheat code , a KING

Burna boy got heartbroken and he cooked a Grammy deserving album, got two nominations for it. That hurt you feeling right now, use it as a motivation to work harder to get something great.

Burna boy is setting the standards for other artists to follow, last last Grammy go belike headies for burna hand 🦍🦍

Man said 3 Grammy nominations as if all were not features😂😂🤡🤡

Mood to any burna fans coming to ask me if wizkid was nominated for Grammy #GRAMMYs #Wizkid #MLLE #MLLETOUR pic.twitter.com/YEyzwZnKaN

If you think wizkid is bigger than burna with these nominations burna just received then you're a big fool. I mean wizkid couldn't even win a Grammy on his own. He had to gumbody beyonce ffs
Fraud 😂😂😂😂

SEE THIS!  Nkechi Blessing: “There’s nothing on the street, hold your man tight”

5 Subtle Signs That Shows She Really Likes You – No....