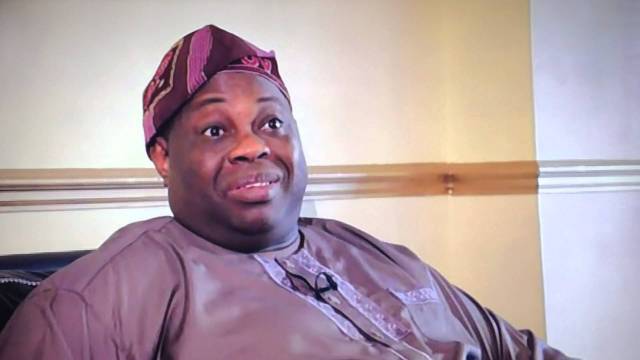 Dele Momodu, the publisher of Ovation magazine, has described the manifesto of Bola Tinubu, presidential candidate of the All Progressives Congress (APC), as an appropriation of MKO Abiola’s legacy.

The ruling party promised to solve Nigeria’s security and economic problems if reelected next year.

Momodu — who is the director of strategic communications of the PDP presidential campaign — criticised the document in an article published on Sunday.

In the article titled ‘APC: Renewed hope or forlorn hope?’, he said the document is filled with “half-thoughts, poor reasoning, and copied notes” from Abiola’s ‘Hope ’93’ manifesto.

Abiola was the presidential candidate of the Social Democratic Party (SDP) in the 1993 election.

He was adjudged to have won the presidential poll before it was annulled by Ibrahim Babangida, then head of state.

Momodu emphasised the difference between Abiola and Tinubu, describing the latter’s presidential bid as a “forlorn hope”.

He described the manifesto as “an insult to the sensibility and needs of Nigerians” and accused the authors of “copy and paste”.

“After carefully reading through the much-awaited APC Presidential Campaign Manifesto that was released over the weekend, we cannot but conclude that the elephant has given birth to an ant. After such a long delay, what the APC Presidential candidate has come up with is a series of platitudes, half-thoughts, poor reasoning, and copied notes packaged and presented as “Renewed Hope”.

“The APC and its Presidential candidate, Bola Ahmed Tinubu, could not even come up with something original: “Renewed Hope 2023.” Really? This is again, another attempt by the APC candidate to appropriate Bashorun MKO Abiola’s Legacy. It would be more salutary if he were to run on his own steam instead of copying the memory of a man whose life trajectory was uncommon and whose hope for Nigeria was noble. And the APC candidate should be reminded that 1993 is far different from 2023,” the Ovation publisher said.

“The late MKO Abiola was known for industry and brilliance. Shall we ask what the APC candidate is known for? Whereas MKO’s Hope ‘93 was a genuine course; for the APC and Nigerians, it’s a forlorn hope ~ and that’s the message of Bola Tinubu and the APC campaign in 2023

“In all honesty, the 80-page document that the APC has put together comes across as a little more than an insult to the sensibility and needs of Nigerians.

“At a time when the country is in dire need of clear leadership with vision and courage, all the APC seems capable of doing is to generally copy and paste regurgitated ideas of others with nothing original or breathtaking. Asiwaju says he “knows the way”. With due respect, he does not. On more than one occasion, he has advertised himself as the architect of the victory of the APC in 2015. Their party’s slogan then was “Change.”

“In eight years, they have not been able to change anything positively. They have led Nigeria into a ditch. Inflation is close to 21%. Unemployment rate is 33%. The Naira is one of the worst-performing currencies against the dollar in the world. The suicide rate in the country has risen terribly, because the people have lost hope. Divorce rate too because the APC and its leaders have castrated families, and ruined “the other room:”. Thus, they have worsened the condition of Nigerians.

“Now, in 2022, Tinubu says he wants to take Nigerians on a journey. A journey to nowhere, most certainly; or, to be precise – to perdition. A week ago, he promised that he would ensure the continuity of the current administration. What does he want to continue? If I may ask: the poverty, agony and cluelessness that the APC have imposed on Nigerians?

“Like a crafty student trying to avoid being caught in the act of plagiarism, the authors of the document have tried to rewrite some unoriginal ideas. The authors of the document do not only offend Nigerians with their collection of cliches and pedestrian ideas but they offend, expose and indict the APC candidate Chief Bola Tinubu. I urge you in the spirit of fairness to interrogate what the APC calls a manifesto. You will see that they are promising exactly what they have not been able to achieve in eight years.

“Chief Bola Tinubu is not new to Nigerian politics. It is sad that he allowed some people to copy and repackage, without tact or grace, the Abiola Hope ’93 manifesto and mixed it with the 2015 APC/Buhari manifesto for him. They even have the impudence to tag it ‘Renewed Hope’. Nigerians do not need a copy and paste manifesto. They want details and original ideas. The way this country is right now, offering the people empty promises would not take us forward. The question for every Presidential candidate is how? How will you solve the problem? We all know what the problem is. Tell us how? For eight years, Bola Tinubu has projected himself as the power behind the throne. His party has failed to lead Nigeria forward.

“They must stop blaming the Peoples Democratic Party (PDP). They must stop blaming the world and COVID 19. The duty of government is to provide leadership and solve problems. Leadership is about managing people and resources. Nigeria urgently requires a leader with exemplary capacity and ability to lead a nation in confusion with distinction and never with untested experimentation. We’ve already gone through calamitous experiments in the last eight years. The APC government is the only government that blames others and the past for its lack of innovation and creativity,” the article read in part.