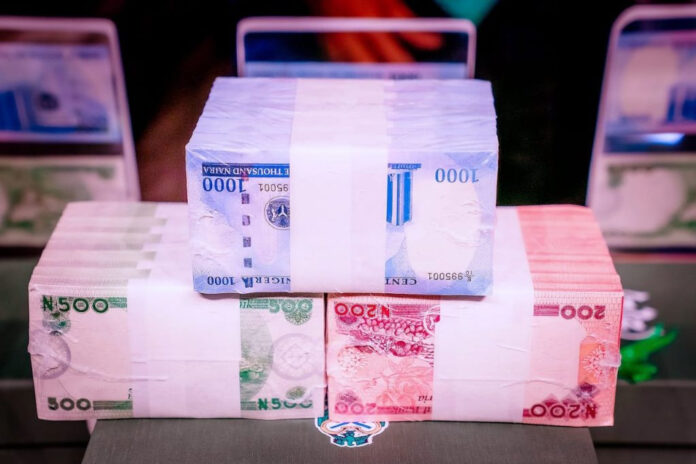 The President unveiled the redesigned notes across the N200, N500 and N1,000 denominations.

The Governor, Central Bank of Nigeria, Godwin Emefiele, had in October announced that apex bank would release re-designed naira notes by December 15, 2022.

He also disclosed that the old notes would cease to be regarded as legal tender by January 31, 2023.

Emefiele pointed out that the redesigning of the naira notes would help to curb counterfeit notes, and reduce ransom payments to terrorists and kidnappers.

The CBN boss said it was worrisome that 85 per cent of the total currency in circulation was being hoarded by Nigerians.

Meanwhile, top officials of commercial banks confirmed to our correspondent on Wednesday they had received the new notes from the CBN a couple of days ago,  adding that the redesigned currency would be released to their customers effective Thursday (today).

“We got the funds (new notes) about two days ago. Our head office has dispatched the funds to various area offices across the country. My branch will pick up our allocation at a nearby area office. We will start releasing the new notes to our customers by Thursday,” according to a top official of a commercial bank who spoke to one of our correspondents on condition of anonymity on Wednesday because he was not authorised to speak on the matter.

Multiple banking sources also said the new notes had arrived and were being kept in their vaults.

They confirmed the new notes would be paid to customers in banking halls beginning from Thursday.

“The new notes have arrived, it will be made available to customers from tomorrow (Thursday)” an official of Polaris Bank who pleaded anonymity told The PUNCH.

Also, a manager at First Bank Plc who was not authorised to speak on the matter said, “We have the funds from the CBN now. It came in some days ago but it will be made available to customers from tomorrow (Thursday).”

However, some bank officials claimed the amount of the new notes available to the various bank from the CBN was small.

According to them, most OTC payments will still have to be made using the old notes because the amount of the available new notes is still small.

Also, multiple banking sources confirmed they have started to reconfigure their ATMs to identify the new naira notes.

op bank executive said, “Most of the banks have started reconfiguring their ATMs so that they can identify the new notes of N1000, N500 and N200.,”’

Meanwhile, findings from the CBN show the total amount to be released into circulation may not be much as the sum previously in circulation.

SEE THIS!  “Forget feminism, I’m tired of waking up each morning unmarried” – Lady cries out

A top official of the CBN, who spoke on condition of anonymity, said the CBN was planning to increase electronic payments and not cash transactions.

According to him, the CBN will not be printing large amount of the new notes.

He said, “The CBN has been disbursing the new naira notes to the banks but does not intend to disburse large quantities because it wants to boost electronic payments.

“Don’t expect that there will be a large circulation of the new notes in the economy. There are different electronic channels that people should be using.”

Barring any last-minute change of plans, the House of Representatives will on Thursday (today) grill Emefiele over the new cash withdrawal limits policy which restricts OTC payments for individuals and companies to N100,000 and N500,000, respectively.

The CBN had, in a memo introducing the policy, said third-party cheques above N50,000 would no longer be eligible for OTC payment while extant limits of N10m on clearing cheques still remained.

The circular also directed banks to load only N200 and lower denominations into their ATMs and restricted withdrawals from ATM to N20, 000 per day. Withdrawals from PoS terminals were also limited to N20,000 daily.

The policy, which will become effective on January 9, 2023, has generated criticisms but the CBN clarified last Wednesday that PoS operators could apply for a waiver.

The House had last Thursday summoned the CBN governor to appear before it to explain the policy.

House of Reps sources told one of our correspondents on Wednesday that Emefiele was being expected in the chamber as planned.

Meanwhile, the Senate on Wednesday called on the CBN to review the newly introduced cash withdrawal limits policy.

It also directed its Committee on Banking, Insurance and other Financial Institutions, to embark on an aggressive oversight of the central bank.

The Chairman of the committee, Senator Uba Sani (APC Kaduna Central), had in the report argued that the proposed cash withdrawal limits policy was well conceived by the CBN for the transformation of the nation’s economy, noting that the action falls within the mandate of the apex bank as provided for in Section 2(d) and 47 of its extant Act .

However, during the general debate on the report, many of the senators kicked against the timing of the policy stating that it could be particularly counter-productive.

The first to revolt was Senator Ajibola Basiru (APC Osun Central), who said the proposed threshold of N100,000 and N500, 000 withdrawals per week for individuals and corporate bodies respectively, was unrealistic.

He said, “Based on the report I got from my constituencies who are basically small traders, rural dwellers and people who may be negatively impacted by the policy, I think it is better to stick to fact, the threshold that has been set is totally unrealistic to have any robust and meaningful life for our people.

“Above N100,000 per week, you pay a processing fee of five per cent, looking at the inflation trend in our country and looking at the average cost of living and survival of every family in Nigeria, N20,000 daily withdrawal is going to terribly affect our people.”

SEE THIS!  Elon Musk Now In Charge Of Twitter As CEO | READ DETAILS

Interrupting Ajibola, the Deputy Senate President, Senator Ovie Omo-Agege, who presided over the plenary, said, “That would mean that the senate was interfering with the independence of the bank in line with Section 2 sub-section (47) that gave the CBN this power.”

Ajibola who still had the floor, in his response said, “If we cannot make suggestions on the threshold, then we have no business talking about this issue. I suggest that we increase the threshold to N100,000 daily and N500,000 weekly. This is realistic; the law is made for man and for the welfare of the people in our society.

“Why can’t we considerably adjust the withdrawal limits, that is vague, nebulous and adds nothing to the agitations of the Nigerian people who have elected us into the office.”

Also, Senator Adamu Aliero (PDP Kebbi Central) said, “This report gives us an ideal picture of what the economy should look like but in reality, it’s not the same. The informal sector of the economy in Nigeria is very big and it’s not captured in the banking system.

“Most people living in rural areas don’t go to the bank, they keep their money under their pillows and there is a need for sensitisation and enlightenment for the programme to fly. We have 774 local governments in this country; I can assure you that the banks barely have branches in 60 per cent of the places.”

He added, “I support the idea of e-banking but we should do it with caution. The CBN should considerably adjust the withdrawal limits in response to the public outcry; people are against this policy. If we give it about two to three years, people will embrace it.”

Again, in defence of the apex bank, Omo-Agege reminded the senate that the policy started 10 years ago but his colleagues chorused, “where?”

Senator Adamu Bulkachuwa (PDP Bauchi North), in his contribution, warned that the proposed policy, if not suspended, might trigger a revolt from rural population.

Bulkachuwa said, “Senate committee recommendations on the proposed CBN policy, is nothing but trying to put wool in the eyes of Nigerians.

“There are local people that are dependent on daily market as their means of survival and the farmers in my constituency who engage on their farms need a lot of money and all of them are paid on daily basis.

“This recommendation doesn’t make sense to me and the Nigerian people.”

The lawmaker representing Osun East, Senator Francis Fadahunsi, noted that the policy was good but the timing was wrong. And it would mostly affect the rural people that they represent.

Fadahunsi said, “All of us here, including the House of Representatives, all come from the rural areas and we know what it means. And now that we are sitting under the comfort of air conditioner, we forget that we have problems at home.

A policy like this was introduced in 1984 and 1985 and I knew what some people suffered. Our people need a lot of time and education so that they won’t have problems.”

He added, “This policy is good but the timing is wrong. Massive consultation was not done.”

In her comment, Senator Stella Oduah, (PDP Anambra North) noted that, “I don’t think that anybody objects to the fact that a cashless society is what we need. My concern comes a as a result of us being punitive.”

The chief whip of the Senate and the vice Chairman of the committee, Uzor Kalu, (APC North), who also signed the adopted report on the proposed policy, kicked against it in his contribution.

“The N500,000 per day for individuals and N3m per day for corporate bodies being implemented in Abia, Lagos, Ogun, Rivers, FCT  etc, should be sustained across the country for now.

Also, Senator Biodun Olujimi said, “When this issue came out, everyone that spoke on that day agreed on what the CBN was about to do. However, we were sceptical of certain issues contained in the proposal.

“Why is this happening during an election period? Why is it that it is coming now? There is a need to be flexible in what we are doing now.

“The CBN approved PoS operators and registered them and took money from them and now those people can only do so little. It took all our unemployed graduates off the street. This policy will send them back to the streets.

Other Senators who kicked against the implementation of the policy as planned from January 9, 2023, were Ibrahim Hassan Hadeija (APC Jigawa North East) etc .

“The committee we have put in place should go back and talk to the CBN to relax this measure. The N20,000 per day for the informal sector is not sellable.” – Senator Chukwuka Utazi

After the debate and the opposition of the lawmakers to the recommendations of the committees report, Omo-Agege put the issue to a voice note and although the “Nay” had it, he ruled in favour of the ‘’yeah.’

Senator Francis Alimikhena said, “Let us try it and see what it is. For me, let us give this policy a chance.”

“It is my opinion that we give this policy a chance. If we continue to talk about rural area, we can never implement new policy.  If it doesn’t work well then we can have an amendment.

Senator Yusuf said he supported the policy as it would help curb inflation but also recommended that the highest denomination should be N100 notes.

See What The Fans Are Saying About Wizkid’s New Song ‘Money...

10 Worst Governors In Nigeria Right Now (No.5 Will shock You)

Elon Musk Says Risk Of Him Being Assassinated Is ‘Quite Significant’