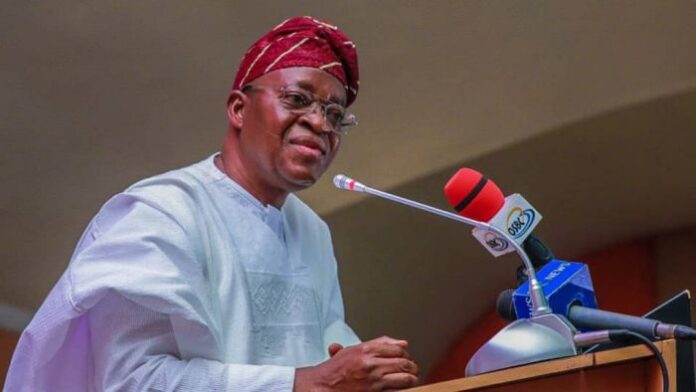 The Disagreement between Osun State’s current governor, Ademola Adeleke, and his predecessor, Adegboyega Oyetola, has restarted over the state’s debt load, despite Oyetola’s claim that he left N14 billion in the state coffers.

The outgoing governor added that his successor is making embarrassing comments in public because he lacks governance knowledge.

In the meantime, Adeleke stated that the state is indebted to the tune of N407.32 billion in addition to debt owed to local contractors while addressing the council of traditional rulers during their monthly meeting at the Ministry of Finance Building.

Governor Adeleke added that Oyetola should explain how he spent the N18.04 billion he accessed after he lost the July 16 governorship election.

However, Oyetola in a statement by his spokesperson, Ismail Omipidan, insisted that he did not borrow a dime during his four years tenure in office.

He added that Adeleke needs experts to tutor him on workings of government in order to stop embarrassing himself in public.

“My good people of Osun state, the total loan stock as of today is N331.32 billion.

“If the N76 billion debt on salaries and pension are added, the state is indebted to the tune of N407.32 billion. The amount owed contractors is yet to be determined.

“The only fund in government coffers, as of Monday 29th November, was for November 2022 salary.

“Otherwise, the state treasury was empty. As your governor, I will ask questions on your behalf. And will demand answers.

“Governor Oyetola must explain how the N331 billion borrowed in the name of Osun State was expended, with no obvious infrastructure development to justify this huge debt.

“Governor Oyetola must explain how the N18 billion Bridge Loan taken after he lost the election on July 16 was expended.

Former Governor Adegboyega Oyetola disclosed that he did not borrow a dime during his four years tenure, saying the claim by Adeleke that he borrowed N18.04 billion only exposed his lack of understanding of governance.

SEE THIS!  Adeleke rejects tribunal verdict: “We will appeal the ruling”

Oyetola in a statement by his spokesperson, Ismail Omipidan, insisted that he left in the state coffersN14billion while leaving office.

“I insist for the umpteenth time that my principal never took any loan facility for the four years he used in office.

“The claim by the new governor shows clearly that he lacks understanding of how government is run.

“If you go to my principal’s welfare address, he stated it clearly, that like every other state, we benefitted N3 billion on monthly basis for six months from the Federal Government as budget support.

“This money was given to all the 36 states of the country without requesting. You cannot categorise that as loan.

“So the new governor does not understand the working of government and he should have allowed those that understand the rudiment to explain it to him. So that he won’t be coming to the public to embarrass himself the way he did.

“We also left N14 billion behind. They should tell the people how much they met in the state coffers.”

INEC: Preparations for 2023 general election are largely being concluded