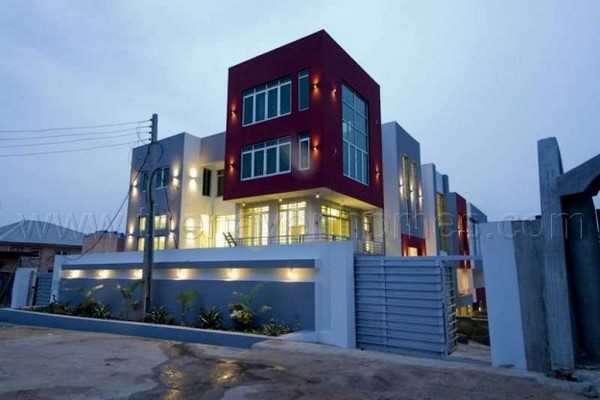 In this article, we will be looking at some top Nigerian celebrities who splashed millions of money on house acquisition in 2022. 1. Nosa Rex: Nollywood actor, Nosa Rex broke the internet with news of his new mansion at a time the social media was still buzzing with congratulatory messages for a new SUV.

The luxury purchase got many Nigerians questioning the source of his wealth. The actor who announced the acquisition of his new home on Instagram expressed appreciation to God.
He wrote: “I’m grateful Lord Nosa Rex” 2. Laide Bakare:  Just like Nosa Rex, Laide Bakare, in May stirred reactions online with the acquisition of a new house and two cars worth millions of Naira.

According to the actress, the new house is worth a hundred million Naira. Sharing photos of the new building on Instagram, Laide noted she is living her dream.

She wrote: “Living my dream” 3. Alex Ekubo: The 36-year-old actor and model took to his Instagram page on August 1, 202 to showcase his expensive mansion. Alex also appreciated God for the gift of a new home.

He wrote: “New Month, New Home. Thank you Lord for the Gift of New, I’m Grateful” The ‘Zazu Zeh’ crooner in June took to his Instagram page to show off the house which happens to be a bungalow. He also appreciated God for becoming a house owner. “Who God has blessed no one can pull such soul down. 400, 000, 000 is a lot but I told God that if truly you say people who give out to people need get multiples back from you let me buy this house to shame all my haters!! I’m not saying this to show off to anyone yeah but I just want to let you know that never gives a fuck about people opinions about you face your goals and let them continue trying to pull you down” “Happy birthday to me. Bought another house and another car. God has truly been good to me” 7. Davido: It will be out of place not to mention Davido as he often spends money on luxury items including cars and wristwatches.

Earlier in 2022, the singer acquired a new crib in Banana Island, Lagos State which is reportedly worth $1.2 million. 8. Sina Rambo: Nigerian singer and cousin to Davido, was the first celebrity to unveil a new house in January 2022.

The artist, who has been out of the music industry for some time, took to Instagram to share photos of his new home. The 27-year-old shared photos of the new home in a post shared on Instagram where he talked about how he moved from hustling for free bed space to becoming a house owner.

He wrote: “Went from hustling for free bed space to investing in real estate” His friend and popular dancer, Pocolee shared the exciting news on Instagram and congratulated the singer for his accomplishment The friend claimed that the singer paid half a billion Naira for the house. 12. Kizz Daniel: The ‘Buga’ crooner a few weeks ago, shared a short video of the new house and a grateful caption to God and his fans who helped him purchase his dream house.

What a year! Always wanted a house beside the waters for my wife and kids, so God and the best fabs in the world helped me #Buga Thank you. 13. Crowncy Anyanwu: Nollywood actress, Crowncy Anyanwu, also joined the many celebrities that acquired houses in 2022.
She announced the acquisition of her new home on her Instagram page.

“Big congrats to me as I splash millions on acquiring a big mansion in Lekki…it can only be God. Earlier this year I never thought of or even dreamt of having such a big achievement to my name, but God in his infinite mercy made it happen. I returned all praise and all thanksgiving to the almighty God”. Oga Sabinus, who is a resident in Port Harcourt, shared the photos of his newly acquired crib on social media with his fans on Thursday, 1st December.

Sharing a video of a swimming pool painted in blue and black color, Oga Sabinus wrote:

” Abeg no be 100m o, country rough o before them carry who de manage life o.”